Olivier Ginon, Chairman-CEO of GL events, commented: “After a first half that was still down in relation to 2019 and 2020, our business is now back on track, demonstrating its resilience and registering a strong rebound. In France, the introduction of the “health pass” and the “Safe and Clean” system implemented by GL events allowed us to organise trade shows, fairs and events without limitations on the number of attendees under optimal safety conditions.

In international markets, revenue in Asia has exceeded 2019 levels while South America remains subject to constraints. In view of the context (government-ordered closures for approximately 6 months in Europe and 10 months in South America), we confirm our revenue target for fiscal 2021 of close to €700m, including approximately €500m in the second half, with positive net profit attributable to Group shareholders. In addition, trends for 2022 are encouraging with the signature of the contract for the 2022 Commonwealth Games in the UK and progress on negotiations with contracts for the Football World Cup in Qatar confirming a rapid return to pre-crisis levels of activity. Once again, I would like to thank our employees and operational partners for their commitment as well as our financial partners for their support.”

As at 30 September 2021, nine-month revenue amounted to €437.8m, up 19.2%, marking the recovery of the business in relation to the health crisis experienced in 2020. Business has rebounded notably in Asia, driven by China, operations linked to the Olympic Games in Japan, and also in France, where governmental restrictions have been eased.

Quarterly revenue amounted to €228m, a twofold increase compared to Q2 2021, highlighting the progress, quarter after quarter, and despite the constraints continuing to weigh on South America and international operations in all regions. 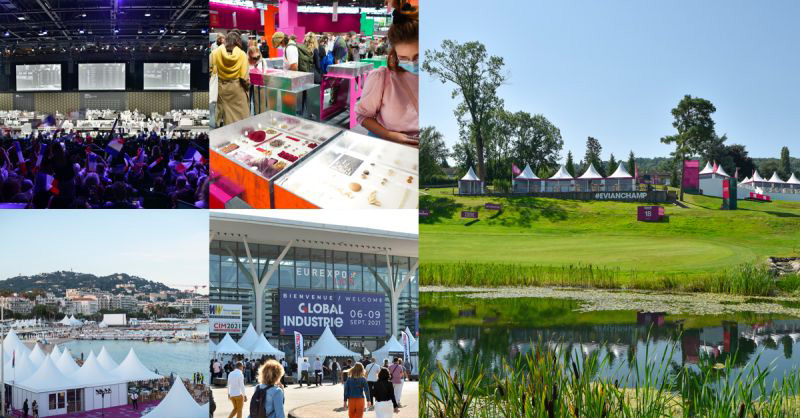 REVENUE BY DIVISION
For the first nine months, revenue for the Live and Exhibitions divisions was up in relation to the same period in 2020. The Venues division continued to be penalised by the closure of sites in South America and the absence of in-person international conventions.

On a sequential basis, each of the divisions confirms, quarter after quarter, a resumption in positive momentum throughout 2021.

GL EVENTS EXHIBITIONS
The Exhibitions divisions had revenue in the third quarter of €53.3m, up 56.3% in relation to Q2 2021. This division benefited from the organisation of numerous trade fairs in France, including a certain number rescheduled from H1 2021. Noteworthy events in the period included Sirha Lyon, Global Industrie Lyon, Première Vision Paris, Sirha Omnivore and Expobiogaz, all organised under optimal safety conditions. In addition, the Group continued to deliver digital solutions, particularly for international trade fairs, to maintain links between exhibitors and visitors while travel is not possible. However, feedback from all participants has confirmed the vital nature of GL events’ core business of inperson exhibitions. Revenue for the first nine months rose to €105m or up 76.4% from last year’s same period (+76.9% LFL).

GL EVENTS VENUES
had revenue in the third quarter of €51.7m, more than tripling in relation to Q2 2021. This division is still affected by government-ordered closures that continue to be in force in South America, including for convention centres hosting international events. During the quarter, the Group notably organised a number of fairs in Toulouse, Metz, Strasbourg, Saint-Etienne and Caen, as well as the first OWN (“One with Nature”) Exhibition in Hungary. Revenue for the first nine months amounted to €78.9m, down 5.1% from last year’s same period (-3.4% LFL).

RECENT DEVELOPMENTS
GL events UK was appointed as the Official Overlay Supplier of the Birmingham 2022 Commonwealth Games to be held from 28 July to 8 August 2022. The Group will provide a range of services from design to the provision of temporary infrastructure (structures, flooring, lighting, stands, seating, barriers, etc.) representing revenue of approximately £27m and covering 70% of the sites used for the event.

GL events will implement a social value programme to promote environmental preservation and the circular economy, working alongside key Birmingham charities and CIC’s such as Jericho Foundation and Change Kitchen.

The Birmingham 2022 Commonwealth Games will bring together nearly 4,500 athletes from 72 nations and territories are due to compete in 19 sports and eight Para-sports across 14 competition venues. As the biggest event ever to be held in the West Midlands, it is expected to attract more than one million spectators to the city and have a global TV audience of 1.5 billion.

GL events has also just won a contract in Bourg la Reine (Hauts-de-Seine) to build a multi-sports complex and renovate a gymnasium and a sports facility representing more than 3,300 sqm dedicated to judo and fencing. Work is to start in January 2022 with the opening scheduled in September 2023. These facilities will be used in preparation for the Paris 2024 Olympic Games.

OUTLOOK
In view of its cash position, GL events has the financial resources necessary for its development and in consequence does not intend proceed with a capital increase to support its return to pre-crisis activity levels.

At the end of September 2021, GL events had cash resources of €570m, after having drawn the 3rd COVID-relief government-guaranteed credit line. And after already obtaining the support of its banking partners in the last quarter in the form of a “covenant holiday” for 2021, the Group has just obtained waivers on the Euro PP from its bondholders and on the RCF from its banking partners. Specific discussions with respect to government aid to small and midsize businesses continue to be ongoing The Group will maintain its efforts to efficiently manage costs and oversight over investments.

Revenue should continue to grow in the fourth quarter, building on the momentum of the prior quarters. During this period, GL events should benefit from the organisation of the Dubai World Expo, the FIFA Arab Cup and COP 26. Momentum in Europe will be driven by regional and national events. In China, only one exhibition is scheduled in the last quarter (Fashion Source); activity will also be driven by the Live division (ZZX). In this country, GL events is closely monitoring growth trends and changes in the real estate sector. In South America, the Group has already hosted the first events in Chile to be followed by Brazil in early November while the organisation of large-scale events in this latter country may resume in early 2022. Discussions relating to the appraisal of building space of the Anhembi event venue are making good progress.

Based on these assumptions and on condition that the health situation remains unchanged, the Group confirms its 2021 target for annual revenue approaching €700m and positive net profit attributable to Group shareholders.